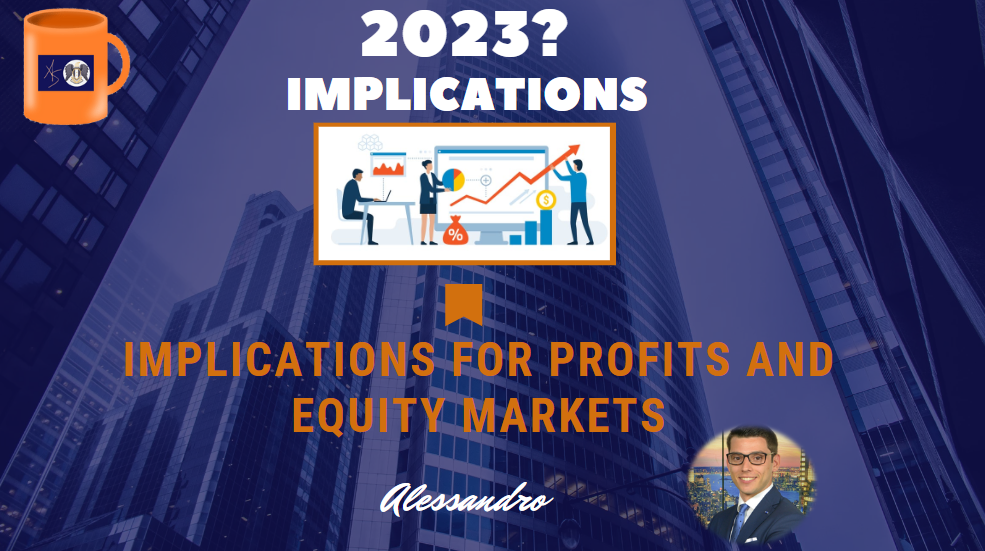 We’re going to the end of the year and each of us is starting to ask what happen in 2023.

The GDP forecasts is not encouraging, and we see as 2023F for advanced economies such as US, Eurozone and UK with minus signals for the entire year.

What does this mean for the businesses and for the economies?

Easy, decline in profits. For this reason, in this research let’s see how profits could slow over the year and which impact could we expect on the stock market with historical data.

A 21% decline in profits would cause 2023 earnings to miss consensus expectations by 32%.

But again, depending on how slowly these misses are realized, the actual drop in forward earnings may only

Let’s see even thanks to Morgan Stanley paper how stage 1 and stage 2 of bear market could try to help us correctly analyze the market’s status now.

For concluding I’d say that the 2023 is not figuring at the best scenario ever, but as we know with the past the markets is always unpredictable and I’m sure they continue to be, so keep high your attention on it.

The risk of a recession has inevitably increased as we turn to prospects for 2023. There are a range of factors that could cause output to shrink over the coming quarters.

One of the primary risks to growth is a further de-anchoring of inflation expectations, which would force policymakers into hiking rates further into restrictive territory.

Further downside risks could emanate from an intensification of the war in Ukraine, an escalation of energy crises, and a harsher than-expected slowdown in China.

Meanwhile, higher rates and the stronger US dollar have started to create headwinds for emerging market finances.

In the past three months, as inflation has reached 40-year highs, another worry has begun to seriously buffet financial markets: the increasing probability of a U.S. recession.

The Global Multi-Asset (GMA) of Morgan Stanley team recently increased its estimated probability of a recession to 55%. Historically, the U.S. economy has never been able to avoid a recession when faced with an oil shock, a monetary tightening cycle and fiscal contraction.

All soft landings occurred with only one or two of these three drags but never all three. And there will be no cushion coming from global demand given China’s weakness and Europe’s likely recession. There is still the probability that inflation begins to decelerate faster than most expect.

A recent San Francisco Fed paper calculates that nearly half the post pandemic acceleration seen in April 2022 has been supply driven and a bit more than a third demand-driven (with the rest being “ambiguous”).

Implications for Profits and Equity Markets However, if Morgan Stanley expectation of a recession proves to be correct, their models indicate that trailing 12-month profits will likely shrink by 21% by the end of 2023. The U.S. equity market’s 24% decline from the peak on January 3 to the trough on June 16 was entirely the result of a 29% multiple compression as forward earnings actually rose 8% so far this year.

Multiples entered the year at 21.6x forward earnings per share (EPS) and troughed in mid-June at 15.4x. We view this multiple compression as Stage 1 of the bear market, one driven by the change in the price of money (i.e., Fed funds rate).

As the price of money started rising (with expectations of much more to come), the price of all other assets fell.

In Stage 2 of the bear market, earnings will fall in absolute terms and more importantly, compared to expectations, which will trigger a second decline in equity multiples, driven this time not by the price of money but by a higher equity risk premium: historically, as earnings fall, multiples fall as well, as investors worry about the depth of the eventual decline in profits.

The decline in equity multiples which could take the S&P down to 13.5x forward EPS is likely to occur faster than the forward EPS decline.

Overall, Stage 2 could see equities fall a further 20%, for a cumulative decline of 40% from this January’s peak.

A 40% decline would be exactly in line with the median market decline in recessions starting in 1900.

Very few investors appear to be pricing in this scenario despite the apparent prevalence of recession forecasts.