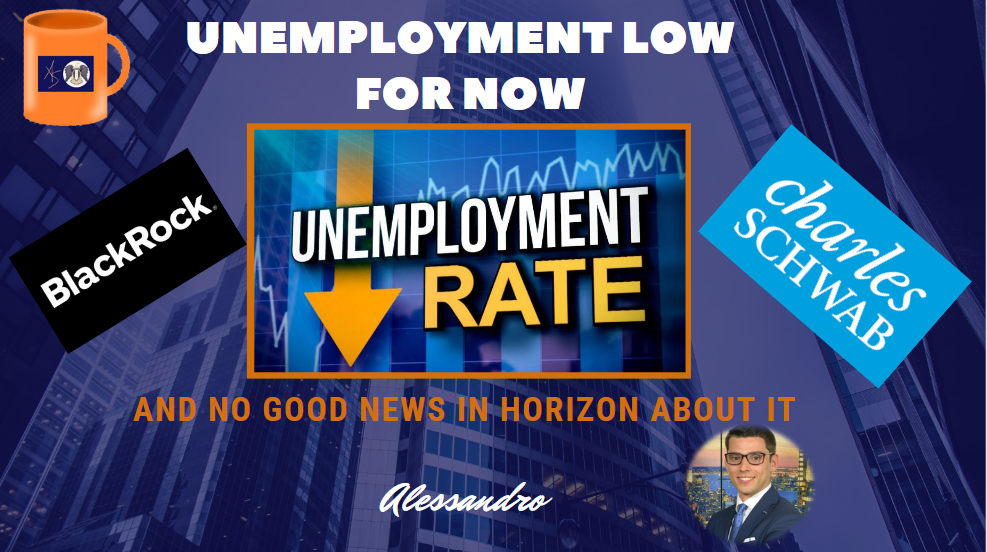 Unemployment – In this article you’ll find: Blackrock don’t think equities are fully priced for recession. But we stand ready to turn positive via their assessment of the market’s risk sentiment or how much economic damage is in the price.

The labour market is still well equipped and the FED is in a good position to continue their way.

History shows that weakness in housing sentiment has led moves in unemployment (both to the downside and upside) quite well.

Does that guarantee that the unemployment rate will be near 9% a year from now? No; but it shouldn’t be lost on investors that housing’s track record of leading the economy is strong.

In fact, the Fed is expecting (pushing for?) a move up in the unemployment rate.

For now, the majority of labor pain has been witnessed in companies’ weaker demand for employees, including fewer job openings and more hiring freezes.

Moreover, with this tightening cycle we can see what damages could create over the long run on new home sales. As per recent research by the Federal Reserve Bank of San Francisco, when the FOMC “uses additional tools, such as forward guidance or changes in the balance sheet, these policy actions affect financial conditions, which the proxy rate translates into an analogous level of the federal funds rate.”

The Proxy Rate, shown below, “can be interpreted as indicating what federal funds rate would typically be associated with prevailing financial market conditions if these conditions were driven solely by the funds rate.” Get inflation back to 2% targets by crushing demand down to what the economy can comfortably produce now, or live with more inflation.

So recession is foretold. Signs of a slowdown are emerging.

But as the damage becomes real, Blackrock believe FED will stop their hikes even though inflation won’t be on track to get all the way down to 2%.

Inflation and financial conditions at odds?

Using both three- and six-month annualized changes, shown below, it’s clear that the trend of inflation is heading lower for both the headline and core Consumer Price Indexes (CPI).

Even the sticky shelter component of the CPI should begin to roll over—perhaps as early as the first quarter of 2023 – due to the fact that many real-time rental indexes (like those from Zillow, Real Page, etc.) have already decisively moved lower. That damage is building. In the U.S., it’s most evident in rate sensitive sectors. Surging mortgage rates have cratered sales of new homes.

In Europe, the hit to incomes from the energy shock is amplified by tightening financial conditions. The ultimate economic damage depends on how far central banks go to get inflation down.

They expect FED to stop hiking and activity to stabilize in 2023.

Don’t’ find that earnings expectations don’t yet price in even a mild recession.

The benign case is that the Fed can successfully bring inflation down to (or near) its target of 2%, without causing a significant deterioration in the unemployment rate and/or the economy more broadly.

Given that the real fed funds rate remains in negative territory, courtesy of every traditional measure of inflation being above it, the Fed likely has more work to do—at least in 2023’s first half.

A recent post from the National Bureau of Economic Research (NBER)—the official arbiters of U.S. recessions—noted this:

“If the behavior of either [the unemployment rate and the job vacancy rate] proves less benign, then reducing inflation [to target] is likely to require higher unemployment than the Fed anticipates.”

Within the same analysis, the NBER estimates that the unemployment rate would have to move up to 7.5% to return inflation to target.

Reality may be something in between the current sub-4% rate and the NBER’s estimate.

High inflation has sparked cost of living crises, putting pressure on central banks to tame inflation – whatever it takes.

Yet there has been little debate about the damage to growth and jobs. Blackrock strategic views have reflected the new regime, with an overweight to inflation-protected bonds for a few years now.

Market expectations and economist forecasts have only recently started to appreciate that inflation will be more persistent. See the gray lines in the chart.

The market’s wishful thinking on inflation is why we have a high conviction, maximum overweight to inflation-linked bonds in strategic portfolios and maintain a tactical overweight no matter how the new regime plays out.

Subsurface labor market weakness set to float to the top Unfortunately, there are several barriers to the labor market’s upward trajectory.

As shown above, one of the most reliable and consistent leading economic indicators – homebuilder sentiment – has fallen sharply this year (the series is inverted, so a move up is bad).

The spike in mortgage rates and a supply – starved housing market have sent builders’ moods into recession territory.

That is typically the first housing – let alone economic – domino to fall. However, as shown above, the key differences today are multifold: the quits rate among employees is higher and the unemployment rate is lower; the Fed has embraced a series of larger rate hikes this time around; and inflation is much higher.

For now, workers still feel confident in their ability to leave their current job and/or find a new one, and companies have thus far been mostly reluctant to get rid of workers (save for tech and other related sectors that have started to lay people off).

However, Charles Schwab think an eventual move down in the percentage of job leavers will be consistent with a recessionary move up in the unemployment rate.

Not only is history supportive of that, but the Fed is telling us in its own forecast for unemployment that a recession is expected.

The central bank’s latest expectation of 4.4% in 2023 would be a 0.7% increase from the current rate. In the long-term history of the unemployment rate, the average increase from its pre-recession trough to its level at the start of a recession is just 0.3%.