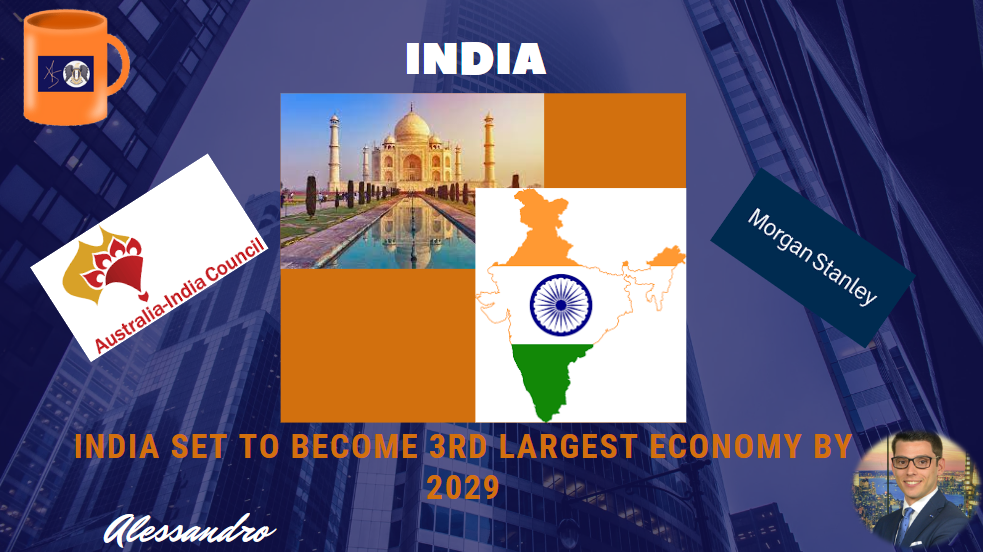 India – In this article you’ll find: India is already the world’s third largest economy and by 2035 its share of global GDP could be on par with the United States (in PPP terms).

According to the Australia-India Council India will also be the world’s most populous country by 2035, with 1.6 billion people across 29 diverse states. Around 640 million Indians will live in cities.

This country is set to growth over the years under all aspects, from energy to technology, from disposable income to exports goods.

Morgan Stanley says that India’s GDP could more than double from $3.5 trillion today to surpass $7.5 trillion by 2031.

Its share of global exports could also double over that period, while the Bombay Stock Exchange could deliver 11% annual growth, reaching a market capitalization of $10 trillion in the coming decade.

Investing in India is a long-term theme, and one that comes with its share of risks, including prolonged global recession, adverse geopolitical developments, domestic policy changes, lack of skilled labor, energy shortages and commodity volatility.

The studies and research are clear, India is going to be an important player in the world and here you can find a deep focus on it, hoping that you can appreciate my article.

An India Economic Strategy to 2035

India is a remarkably young country – its 440 million millennials, the largest number globally, are tech savvy and spurring consumption.

According to the Australia-India Council India has the largest tertiary age (18-22) population globally.

Demand for education spans every sector of India’s economy. India’s demand for energy is set to outpace domestic supply.

Demand for healthcare will continue to dwarf domestic supply.

Digital payments in India could pass the $1 trillion mark by 2030.

India Surpassed The Size Of Uk Economy In December 2021 They firmly believe that it is immaterial and believe 6% -6.5% growth is the new normal.

India has undergone a large structural shift since 2014 and is now the 5th largest economy.

Interestingly, India had surpassed UK as the 5th largest economy as early as December 2021. The path taken by India since 2014 reveals India is likely to get the tag of 3rd largest economy in 2029.

India should surpass Germany in 2027 and most likely Japan by 2029 at the current rate of growth.

This is a remarkable achievement by any standards. In coming days India is likely to be the beneficiary as China slows down in terms of new investment intentions.

That captures aspirations of an upwardly mobile population should open the flood gates for other major conglomerates to follow suit. The potential contribution of the growing population to India’s GDP growth would depend, among other factors.

It would also depend on increase in labor productivity and the impact of rising per-capita income on savings and capital formation.

Table 1 by OECD below gives the estimated growth rates for a selected group of countries in the OECD baseline scenario.

In the case of world, China, India and the US, average growth rates progressively fall.

Decade after decade, although the rate of this decline slows after the 2030s.

The main reason for the falling growth rates is the declining marginal productivity of capital.

Indian economy in market exchange rate and PPP terms until 2049

Thanks to EY the charts shows the evolving size of the Indian economy in both market exchange rate and PPP terms.

We expect that by FY48, in PPP terms, India’s GDP may reach the US$40 trillion mark.

India will have the third largest stock market by 2030

Morgan Stanley think India is on track to become the world’s third largest economy by 2027, surpassing Japan and Germany.

They should become the third largest stock market by 2030.

Due to global trends and key investments the country has made in technology and energy.

Indian consumers are also likely to have more disposable income.

India’s income distribution could flip over the next decade.

Overall consumption in the country could more than double from $2 trillion in 2022 to $4.9 trillion by the end of the decade.