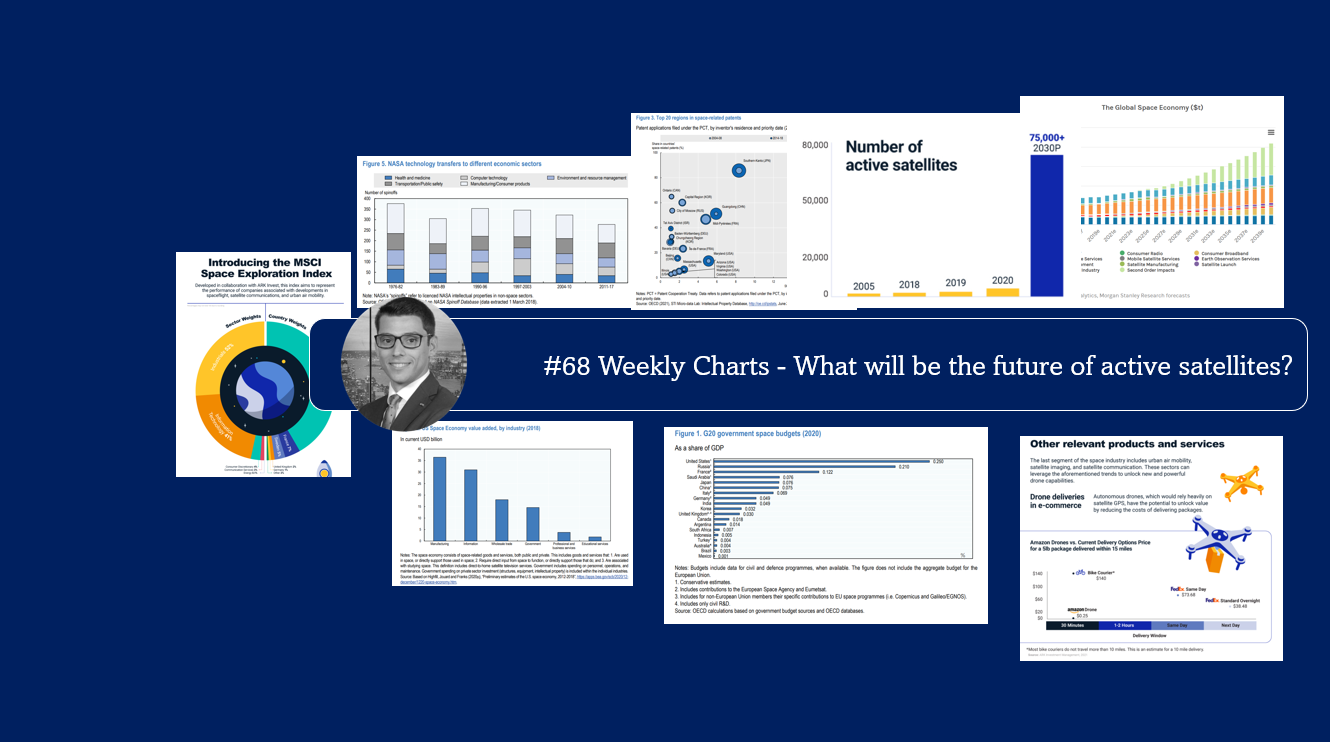 What will be the future of active satellites? Many more satellites are planned for the future, as recent technological breakthroughs have dramatically reduced the cost of rocket launches.

Combined with other aerospace innovations, the satellites could enable futuristic solutions like drone deliveries, or bring internet access to the world’s underserved. Over the past several decades, space and satellite technology has become the invisible foundation of our digital world. 1,700 active satellites are currently orbiting the Earth, and together, they enable many of the technologies we use on a daily basis.

Looking forward, this industry is on the cusp of a significant ramp-up. Recent technological breakthroughs have drastically reduced the cost of rocket launches, and by 2030, analysts expect the number of active satellites to increase by several magnitudes.

Greater satellite coverage is significant because it could unlock futuristic solutions like drone deliveries, or bring internet access to the world’s underserved. To help you learn more, this infographic from MSCI provides an overview of the entire space opportunity.

The revenue generated by the global space industry may increase to more than $1 trillion by 2040.

The investment implications for a more accessible, less expensive reach into outer space could be significant, with potential opportunities in fields such as satellite broadband, high-speed product delivery and perhaps even human space travel. While the most recent space exploration efforts have been driven by handful of private companies, the establishment of a sixth branch of the U.S. military in 2019—the “Space Force”—along with growing interest from Russia and China, means public-sector investment may also increase in the coming years. Privately held space exploration firms have also been developing space technologies, with ambitions such as manned landings on the moon and airplane-borne rocket launchers that could launch small satellites to LEO at a far lower cost, and with far greater responsiveness, than ground-based systems.

While private-equity projects have grabbed most of the headlines in recent years, public-sector interest has also grown. In December of 2019, the Trump Administration established a U.S. Space Command (including a Space Operations Force and a Space Development Agency) with the signing of the as part of the National Defense Authorization Act for 2020. This development will likely benefit the U.S. Defense Department—as well as the aerospace and defense industries—and help focus and accelerate investment in innovative technologies and capabilities. Near term, space as an investment theme is also likely to impact a number of industries beyond Aerospace & Defense, such as IT Hardware and Telecom sectors. Morgan Stanley estimates that the global space industry could generate revenue of more than $1 trillion or more in 2040, up from $350 billion, currently. Yet, the most significant short and medium-term opportunities may come from satellite broadband Internet access.

Morgan Stanley estimates that satellite broadband will represent 50% of the projected growth of the global space economy by 2040—and as much as 70% in the most bullish scenario. Launching satellites that offer broadband Internet service will help to drive down the cost of data, just as demand for that data explodes.

The central role of government in space activities The important role of government investments in the development of space activities is a trend likely to continue in the coming decade, despite greater private sector participation. In G20 economies, government actors play a key role in the space economy as investors, developers, owners, operators, regulators, and customers. Governments are also increasingly partners with the private sector, for the joint development of space products and services. Government agencies fund basic and applied science as well as research and development (R&D), and purchase space products and services. National agencies, research centres and laboratories also perform their own space R&D and in some cases have a role in space manufacturing. Government space budgets account for the lion’s share of investments in many space activities, in particular funding traditional activities, such as space science, space manufacturing and launch (OECD, 2019; Undseth, Jolly and Olivari, 2021). In 2020, the median value of space budgets as a share of gross domestic product (GDP) amounted to 0.05% for G20 economies, as a whole, with the United States and the Russian Federation investing more than 0.2% of GDP and France more than 0.1% (Figure 1). These findings are comparable to those of previous years (space programmes and projects tend to have long lead times), though Saudi Arabia is emerging as a notable new large investor, following a series of programme launches in recent years. It is still too early to estimate the future impacts of the COVID-19 crisis on government space investments and activities as the pandemic is strongly affecting many parts of the world. However, as an illustration, the US National Aeronautics and Space Administration (NASA) estimates that delays caused by the 2020 government lockdown and disrupted deliveries has so far cost the Agency more than USD 1.6 billion (or some 7% of NASA’s 2020 budget) (NASA, 2021). Furthermore, the pandemic caused launch delays in many countries (e.g. it contributed to postponing the European ExoMars mission from 2020 to 2022) (Undseth, Jolly and Olivari, 2021). Lessons learned from the 2001 and 2008 financial crises indicate that business R&D expenditures on the whole could decrease, as could government R&D expenditure in the countries most hit by the crisis (Paunov and Planes-Satorra, 2021). On a more positive note, COVID-19 has contributed to highlighting how space technologies can support society during a crisis, and the role they can play in the recovery. Indeed, some governments have made investments in the wake of the pandemic to improve connectivity (e.g. the Space Infrastructure Hub in South Africa) (SANSA, 2020). It is expected that COVID-19 will reinforce and accelerate the pre-pandemic trend of public-private coinvestments, partnerships and space commercialization, as private sector capabilities mature and public organisations transfer more responsibilities and risks to non-government actors. This is associated with technological transfers to the private sector, deregulation and more extensive space service buys. India and Korea are both in the process of transferring technologies and know-how on satellite and launcher manufacturing to private actors, NASA is extending service buys to space exploration (e.g. lunar payload service contracts) and the People’s Republic of China (hereafter “China”) is encouraging private financing and initiatives in the sector (Undseth, Jolly and Olivari, 2021).

What will be the future of active satellites?

With this research we had try to answer to the question and we have found that there is a great interesting on the topic, specially by the governments.

We have also see how the global space economy could grow until 2039 and is very astonishing the forecasts that I found it.