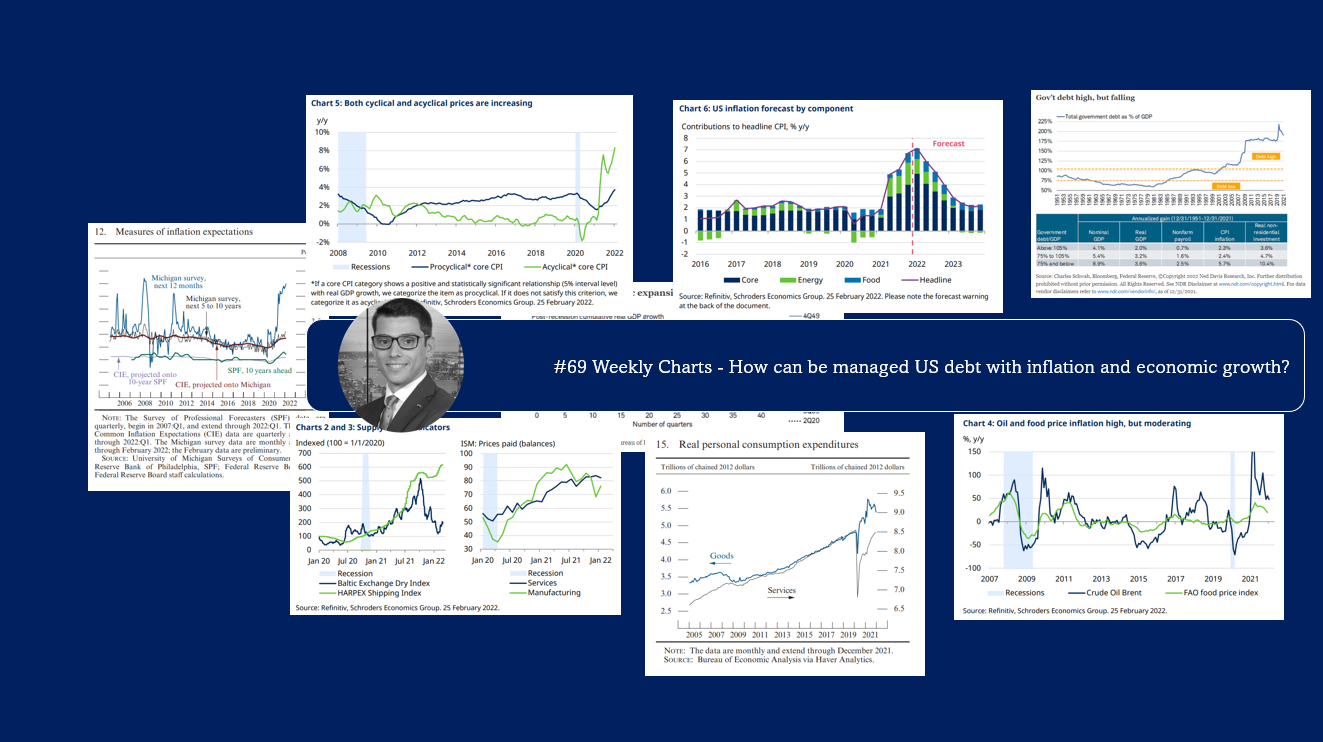 How can be managed US debt with inflation and economic growth? There is always a lot of controversy around the implications of high government debt. Over the past 70 years, high (and rising) government debt has generally been accompanied by weaker economic activity. The cause and effect can be debated, and there is also a bit of a chicken-and-egg, or “circular” argument: High and rising debt is a burden on growth, but low levels of growth also trigger an increase in government spending, higher budget deficits and higher debt.

Even under any future dire assumptions of the growth rate of net interest payments, we believe there is little risk of a U.S. debt default. In the meantime, there is generally an agreed-upon set of ways government can reduce its debt burden. One way, which the United States has been employing since the pandemic erupted is typically referred to as “financial repression”—involving keeping interest rates extremely low, which keeps real yields in negative territory. This force is not yet in the rear-view mirror, but the Federal Reserve has, of course, started to raise interest rates.

Another way is for the government to reduce spending and/or increase taxes. Thanks to the removal of much of the pandemic-related direct fiscal stimulus, and the beneficial impact on tax receipts courtesy of the strong economic recovery coming out of the lockdowns, both are working in favor of bringing down the rate of debt growth. Finally, the government can also try to boost growth and inflation, such that the denominator (GDP) is growing faster than the numerator (debt). That was exactly what happened in the late 1940s, just after WWII. Today, however, inflation is growing much faster than the economy; as well as faster than wage and income growth.

Inflation expectations likely influence actual inflation by affecting wage and price-setting decisions. In the University of Michigan Surveys of Consumers, households’ expectations for inflation over the next 12 months continued to climb, reaching levels that are among the highest observed since the early 1980s (figure 12). In contrast, expectations for average inflation over the next 5 to 10 years from the same survey flattened out in the second half of 2021 after having moved up modestly in the first half, and they now stand near levels observed about a decade ago. Meanwhile, 10-year PCE inflation expectations in the Survey of Professional Forecasters edged up, on net, since mid-2021 and stood at 2.2 percent in the first quarter of this year. That increase was driven by higher expectations for the next five years, with expectations for inflation remaining at 2 percent over years 6 through 10.

Consumer spending on goods edged lower, on balance, over the second half of 2021 as the boost from fiscal stimulus waned and low inventories held back purchases of some goods, particularly motor vehicles. Even so, goods spending remains quite elevated relative to its pre-pandemic trend (figure 15). The further reopening of the economy boosted spending on services in the second half, albeit at a less rapid pace than last spring, as the Delta wave weighed on demand for in-person services in the summer and the Omicron wave began to do so late in the year. Despite the continued recovery in services spending, this spending remains well below its pre-pandemic trend. In all, the data over the second half of 2021 indicate only a moderate amount of rebalancing of consumer demand toward services and away from goods.

Supply chains remain stretched, but some indicators of supply pressures are beginning to fall back, such as the Baltic freight index (which tracks the cost of shipping raw materials) and prices paid in the purchasing manager surveys. Semiconductor shortages are becoming less acute and there was a significant increase in retail inventory in the US in Q4 which suggests firms have been able to restock.

It’s not all going in the same direction though as the Harpex index (which tracks the chartering cost of container shipping) has moved up sharply this year and there are ongoing concerns in China where the zero Covid policy can bring abrupt disruptions to international trade as restrictions are often imposed at short notice on whole cities. Food prices have also been buoyant as fears of disruption to Ukrainian and Russian exports have seen prices of wheat and fertilizer rise sharply. The increase in wholesale food prices is less headline grabbing than oil, but food carries more weight in CPI baskets and was up nearly 20% year-on-year (y/y) in January. The lags from wholesale inflation to retail prices are long and indicate that more pain is to come for consumers. The low income emerging market economies are particularly vulnerable to higher food prices which have often been a harbinger of political unrest in the past. Despite these concerns food and energy prices are beginning to decelerate on a y/y basis (chart 4). Our forecast is based on futures prices which, although higher than at the time of our last forecast, are set to make a smaller contribution to annual inflation as we move through this year and next. The third factor is the broadening of the rise in prices. Initially the rise in inflation in 2021 was led by the re-opening sectors such as airlines, hotels and restaurants, however more recently we have seen a pick-up in the cyclical areas such as housing in the US where shelter prices have accelerated sharply (chart 5). Overall, 80% of the US CPI basket components are now rising at over 4% y/y. This suggests it is not just one off supply bottlenecks which are driving the acceleration in inflation with cyclical prices also reflecting excess demand.