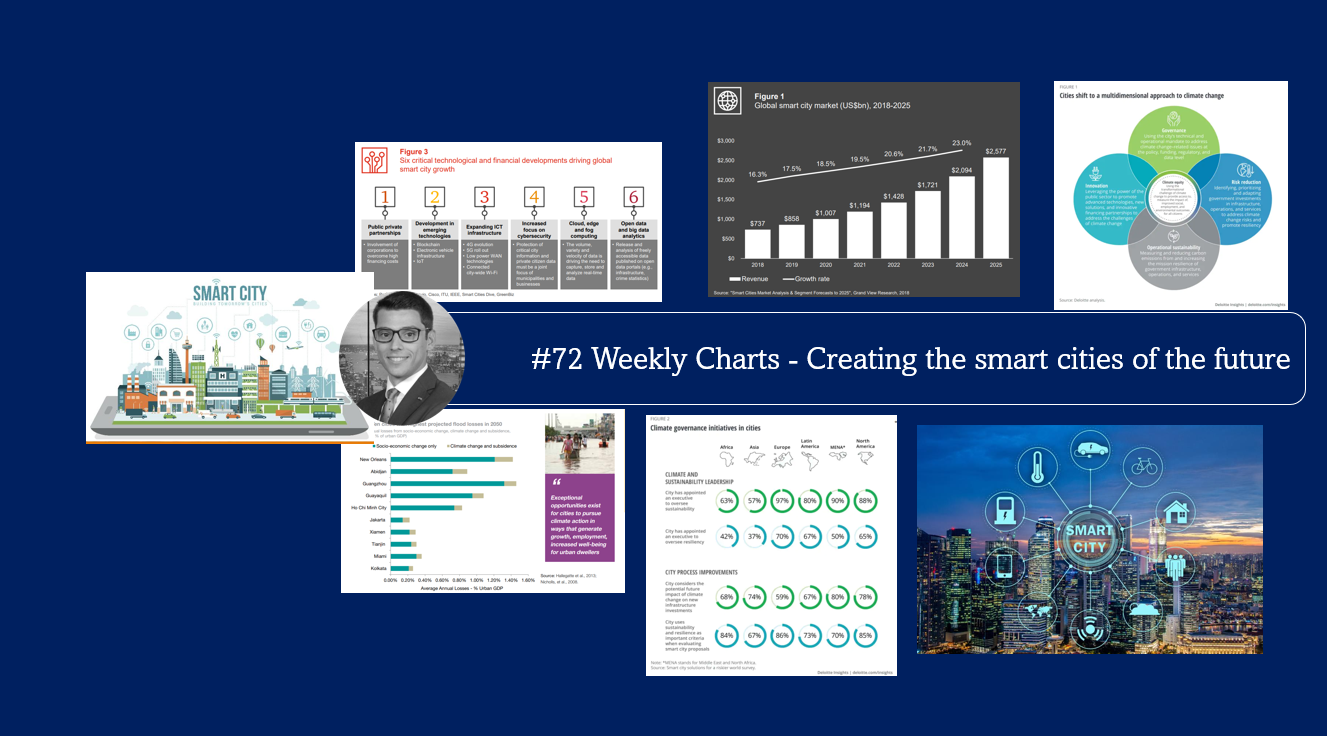 Creating the smart cities of the future Back in 2012, Copenhagen, the capital of Denmark, declared its intent to become completely carbon-neutral by 2025. If successful, Copenhagen will not only be the first capital city in the world to achieve this goal but will likely beat other major cities by more than a decade.

Key to this initiative is the Copenhagen 2025 Climate Plan (CPH 2025). This multidimensional approach to climate change was co-developed with more than 200 stakeholders, including businesses, academics, and citizen representatives. The plan sets specific targets and outlines carbon reduction initiatives in four key areas—energy consumption, energy production, mobility, and city administration. Post pandemic, climate change is likely to become a top policy agenda for cities globally for many years. A quarter of surveyed city leaders said they consider climate change and environmental threats to be a top external disruptor. Additionally, about half of the cities surveyed have made considerable progress toward the UN’s “Climate Action” SDG. But there are large regional variations.

Asian and European cities have made considerable progress toward the goal—67% and 65%, respectively. Europe’s success is due in part to significant public support. The European Union’s 2021 Eurobarometer survey found about 93% of its citizenry considered climate change a serious problem. There is no doubt that climate change and its effects will continue to be an important issue in the coming decade. And cities should evolve a different approach to address the challenge, something that we term as the five lenses of climate action. The five lenses expand on the traditional mitigation and adaptation approach to assist city leaders in identifying opportunities for action. Cities have a key role to play in addressing the global climate change challenge.

• Increasing urbanisation has significant implications for climate change; air quality; water availability and quality; land use; and waste management. Provided that the right policies are put in place, the current wave of rapid urbanisation offers an unprecedented opportunity to create sustainable, liveable and dynamic cities.

• Cities are also particularly vulnerable to climate change – both because extreme weather events can be especially disruptive to complex urban systems and because so much of the world’s urban population live in low-lying coastal areas, particularly in Asia. Vulnerability to storm surges and rising sea levels is set to increase rapidly over the coming decades, as much urban growth is concentrated in Asia.

As a result, co-benefits of climate change mitigation and adaptation are largest in cities. Exceptional opportunities exist for cities to pursue climate action in ways that generate growth, employment, increased well-being for urban dwellers and significant savings from avoided health costs and expenditures on fossil fuels. Financial resources for urban adaptation action can come from public and private sectors, domestic and international sources of funding. The scale and source of funds contributing to climate adaptation varies widely by location. According to a survey (Carmin et al., 2012) of 468 cities across OECD and non-OECD countries:

• Most cities (60%) do not receive any financial support from other partners for their adaptation actions.

• National governments (24%) represent the most common source of financial support for adaptation.

• A smaller number of cities (9%) reported funding from sub-national governments while others (8%) reported support from private foundations and non-profit organisations.

• Only 2-4% of the cities and specifically those in developing countries, reported funding from international financial institutions such as multilateral development banks (MDBs), with large variations across regions. In Latin America for instance, studies show that MDBs are the most prevalent source of funding for adaptation (21%).

The development of smart cities – enabled, powered and integrated by digital technologies – is set to be one of the crowning achievements of societies worldwide in the 21st century.

Already, the everyday lives of people living in countless cities are being made easier, more fulfilling and more secure by previously undreamt-of services enabled by digital. Yet the transformation of our cities has barely begun. And looking forward, as citizens’ expectations grow, urban populations continue to expand, energy efficiency and sustainability rise in importance and government systems are upgraded over time, the pace of progress and innovation isn’t likely to let up.

The development of smart cities around the world is gathering pace, with the total value of the global smart city market projected to exceed US$1 trillion by 2020 and US$2.5 trillion by 2025. As this growth continues, one of the most important and dynamic aspects of smart cities is the evolution of the roles and relationships between the key participants involved in envisioning and creating them. These are primarily government bodies aiming to transform the lives, wellbeing and safety of their citizens; and an ever-widening array of private sector players helping to realize these aspirations, by building, managing and funding digital urban infrastructure and services.

While other stakeholders are also involved – including not-for-profit organizations and citizens themselves – it’s government and the private sector that are largely building the digital infrastructure of the city. Overarching drivers, technology initiatives and challenges – these are the three tiers through which the dynamics of smart city projects are evolving. And cutting across all of them are a number of overarching factors that are driving and shaping the development of smart cities worldwide. As Figure 3 shows, six critical technological and financial developments are acting as the fundamental enablers of smart city growth.

The first of these – the use of PPPs to overcome high financing costs – opens the way for cities to exploit the opportunities presented by emerging technologies, with current focus areas now including 5G, blockchain and electric vehicles (EVs). Further drivers include a growing focus on cybersecurity, cloud and big data analytics – all areas where, once again, private sector expertise can be invaluable.

I’m remained very fascinated by the tomorrow’s cities which we’re going to live likely in the future.

I deduct that reading this papers we have big ambitious in doing this, but at the same time is became a necessity in nowadays world in my view.

We’re witnessing how governments and international institutions majorly are trying to support this project.

I’m a fun of the smart cities, so I believe in this project and I’d like to see all this goals achieved one day.