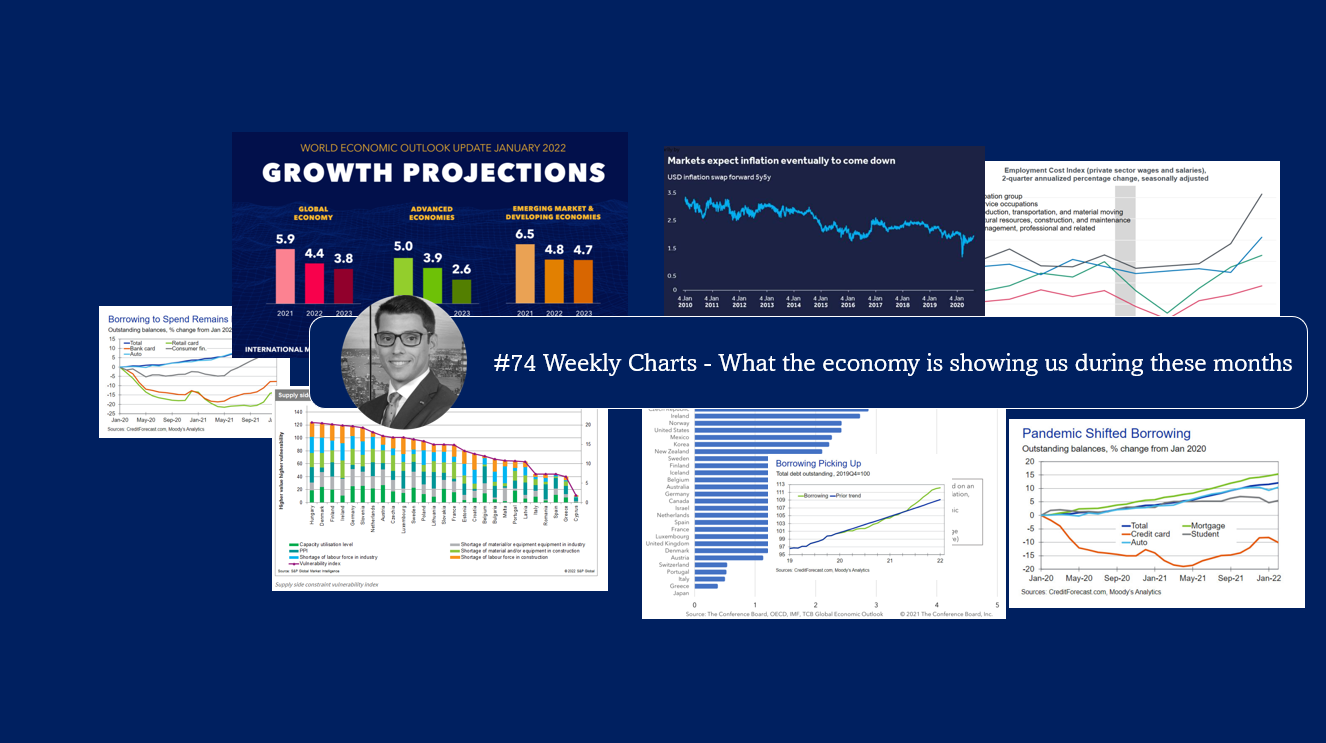 What the economy is showing us during these months Equity markets had a bumpy start to the year even before Russia’s invasion of Ukraine last month. Profit reports remain strong, but the unmistakable signs of higher interest rates ahead are putting pressure on valuations, especially for the highest and most optimistically priced companies. The speculative mood that peaked a year ago is shifting quickly.

As always, we focus on understanding and forecasting long-term profitability as the way to estimate equity returns. As the impact of the COVID-19 pandemic begins to fade, we see increasing signs of normalization in our outlook for corporate profits around the world, although the pace of recovery continues to vary. Economic growth remains above trend in the U.S., and Europe was catching up but the burden of higher energy prices will hit Europe especially hard. China remains in a weaker spot. We are also closely tracking corporate costs to understand how much of the pressure on supply chains, input costs and wages was transitory (the result of the pandemic-driven surge in consumer demand) and how much will likely constitute a “new normal.” Here, the picture is complex, but broadly we expect that many input cost increases will fade and supply chains will gradually normalize over the course of 2022. (Admittedly, little has actually happened so far.) However, wage inflation is likely to be a more serious and persistent issue, especially in the U.S. Meanwhile the pressure on commodity prices has of course intensified in the past few days. Overall, our near-term and long-term profit expectations are stabilizing after big gains in 2021. We see a much more typical path ahead, with steady but slower growth, fewer positive surprises and more disappointments than we experienced during last year’s truly exceptional profit boom. After all, that’s what normalization looks like.

Equity valuations overall look fairly reasonable to us, with equity markets in Europe, Japan and the emerging markets trading at or slightly above long-run averages. In our proprietary research model, Chinese stocks now offer the best returns we have seen for several years, although we are wary that profit forecasts are still moving lower. U.S. stocks continue to trade at a premium, while across markets we still see a high dispersion of valuations and a wider than usual premium for faster-growing companies, despite some big declines in recent weeks. U.S. consumers continued to borrow through the pandemic. The pace of debt accumulation fell modestly below trend early on but recovered as the economy reopened and has accelerated significantly since about the middle of last year as consumer borrowing accelerated and mortgage borrowing remained strong. Like so much about the pandemic, however, this aggregate behavior hides major shifts in the way consumers have borrowed. Reduced spending and abundant government cash have limited consumer borrowing while high house prices and an increased desire for space have boosted mortgage borrowing.

The increased borrowing has not lifted financial burdens on households. The combination of government support to incomes, lower interest rates, and the shift in the mix of debt has resulted in lower debt burdens. However, burdens will not remain low through the Federal Reserve’s tightening cycle. Most borrowing to spend has been weak throughout the period since the onset of the pandemic. First, spending was weak. Even after it returned to prior trend levels, cash remained abundant in the form of government support until recently and available jobs of late. Credit card borrowing has been particularly weak, with retail card balances falling modestly more than bank card borrowing and remaining well below pre-pandemic levels. Consumer finance lending has recovered more fully. Auto lending has held up, first because consumers began to want private transportation rather than public and later because prices soared as supply constraints prevented production from keeping up with demand. The shift away from borrowing to spending is also evident in the mortgage space. Desire for more space in less-dense areas has pushed up demand for homes and first mortgages. However, home equity and second-mortgage borrowing, which more likely is to finance spending, has been weak. The strong demand for homes and unprecedented surge in house prices have supported strong growth in first-mortgage balances.

Despite the supply-side shock, a global recession is unlikely The platform was solid going into the conflict. Services activity should pick up in 2022, from COVID-suppressed levels. The large pool of excess savings built up by locked-down Western households will support consumption (even if those savings sit mostly with higher-income households).

Governments are also expected to try to ease the burden of rising fuel costs. In Europe, those efforts may be supplemented by extra spending on energy independence and defence. In China, the annual National People’s Congress announced in March an ambitious 5.5% growth target for 2022, which suggests more policy easing to come. The US is no longer a large energy importer, so it is better placed to handle the oil shock.

All told, our analysts forecast that the world economy will grow 3.3% in 2022, down from 4.4% in our previous forecast. The global expansion is unsteady, but it is intact.

The investment outlook will be driven primarily by inflation For months, inflation readings have tended to come in higher than markets have expected. And prices are set to get another lift for at least a few months, owing to the Russia-Ukraine conflict.

Much of this is a product of temporary supply-chain strains, or a simple “pass-through” from the spike in energy prices. Eventually, these effects should fade.

But the headline numbers matter: a consumer price index above 7%, in the case of the US, is hard to explain away with forecasts. Second-order effects such as higher wages can come into play, and market expectations of inflation can rise to uncomfortably high levels. In such cases, central banks are forced to respond. Federal Reserve Chair Powell made that amply clear at the March FOMC meeting.

Bond markets expect inflation eventually to settle at about 2%. Investors still believe that central banks will not have to take drastic actions to wrestle prices lower.

What the economy is showing us during these months?

Inflation remain one of the key word this year and is really important to see how will go to close the year and how will begin the new one.

Central banks have initiate to raise interest rates, but we have to see how these will impact the economy and what could be the successive steps by them.