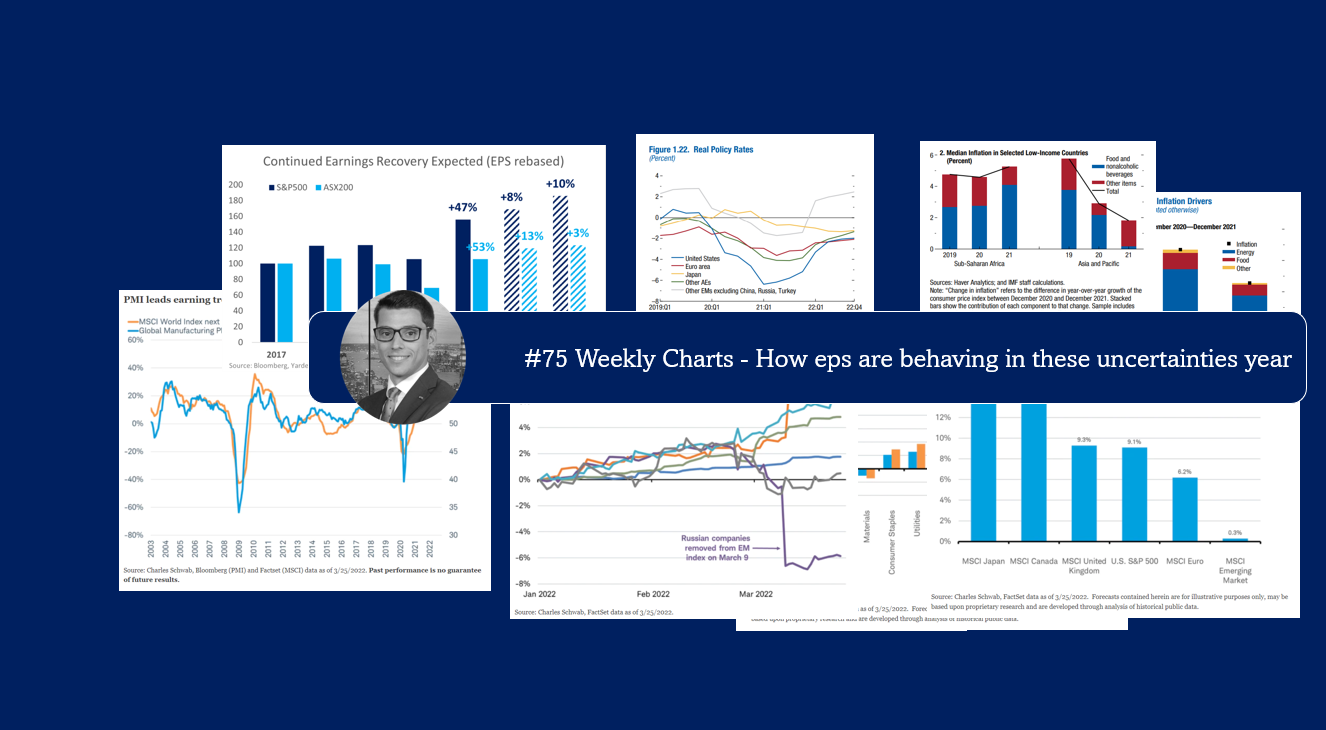 How eps are behaving in these uncertainties years Our analysis found that global GDP growth could range between 3.3%-4% this year and between 2.5%-3.2% in 2023, depending on the scenario. Individual country forecasts under our main scenario can be found in the country chapters, as well as in the Appendix. Our cut-off point for all forecasts and data in the report was 25 March 2022. As we continue to emerge from the restrictions imposed by the pandemic, one of the major concerns has been the rise in inflation across many parts of the world. The conflict between Russia and Ukraine has further intensified these inflationary pressures. Our analysis found that global inflation could average between 4.5%-7.7% this year and between 2.9%-4.3% in 2023, depending on how the crisis evolves. Higher inflationary pressures saw a change in the policy stance of central banks in several economies already last year, with rising inflationary pressures prompting many to start raising rates. So far, The Bank of England has raised its rates during three consecutive meetings and ended its quantitative easing (QE) program. The U.S. Fed began raising rates in March and indicated that rates could rise six more times this year. The change in central banks’ stance, especially the Fed’s, could add volatility to markets as they adjust to a new policy direction. Going forward, the world economy will have to navigate a difficult period ahead under a cloud of geopolitical uncertainty. Businesses and households will be hoping for the best but should plan for potential ongoing disruptions and uncertainty.

Earnings-per-share growth in 2022 for companies around the world (as measured by the MSCI All Country World Index) is now expected by FactSet analysts’ consensus to be up 6%. Prior to the invasion, the consensus was at 7%, a difference of only 1%. Higher post-invasion forecasts in the energy, materials and industrials sectors partially offset modest declines across other sectors. Geographically, earnings per share estimates for 2022 show that the rising trends in the U.S., U.K., and Japan have not changed much this year. Despite Europe’s proximity to the conflict and dependence upon Russian energy supplies, earnings growth is still expected to be higher than it was at the start of the year, though lower by about 1.5% from pre-invasion levels. Reflecting the changes in estimates since the start of the year, analysts’ forecasts for earnings growth in 2022 are still positive across countries and regions heading into the first quarter earnings reporting season, as you can see in the chart below. One of the best leading indicators of the trend in earnings expectations is the global manufacturing purchasing managers’ index (PMI). This survey of business leaders from companies around the world is typically about three months ahead of analysts’ forecasts for earnings over the coming 12 months, as you can see in the chart below of the past 20 years. The level of 50 on the PMI is the threshold between expansion and contraction in manufacturing and tends to align with the division in the outlook between growth and decline in earnings for all companies over the coming year. We will get March’s reading of the global manufacturing PMI on April 1. This month’s preliminary PMI readings for major countries like the U.S., Germany, France, and Japan were resilient despite the war, reflecting only a small dip. If this trend is confirmed with the final global PMI reading on April Fools’ Day, it suggests the outlook for earnings growth is likely to continue.

Of course, the future direction of the PMI and the outlook for earnings remains tied to the impact of the war and sanctions, among many other factors that include inflation and central bank actions. Further escalation of sanctions may have greater earnings impact; current sanctions have been cautiously implemented to avoid disruption of energy supplies. However, investors may take some comfort that the earnings impact so far has remained modest and global companies appear to be on a path for earnings growth this year.

Inflation forecast: With the impact of the war in Ukraine and broadening of price pressures, inflation is expected to remain elevated for longer than in the previous forecast. The conflict is likely to have a protracted impact on commodity prices, affecting oil and gas prices more severely in 2022 and food prices well into 2023 (because of the lagged impact from the harvest in 2022). For 2022, inflation is projected at 5.7 percent in advanced economies and 8.7 percent in emerging market and developing economies – 1.8 and 2.8 percentage points higher than in the January World Economic Outlook.

Inflation in 2023 is projected at 2.5 percent for the advanced economy group and 6.5 percent for emerging market and developing economies (0.4 and 1.8 percentage points higher than in the January forecast). However, as with the growth outlook, considerable uncertainty surrounds these inflation projections. The main factors shaping the baseline inflation outlook are the following. The war in Ukraine has aggravated spikes in commodity prices. Energy and food prices were a major contributing factor to headline inflation in 2021, to varying degrees across regions.

The sharp spike in oil and gas prices—reflecting tight fossil fuel supply after years of subdued investment and geopolitical uncertainty – led to a significant increase in energy costs. These increases were the main driver of headline inflation in Europe and to a lesser extent the United. A key issue for the medium term is where interest rates will settle after the pandemic. Even with the anticipated increases in policy rates, given the outlook for inflation, short-term real interest rates at the end of 2022 are likely to be negative. With inflation at multi decade highs in the United States, the United Kingdom, and the euro area, a crucial question is how high policy rates will have to rise in order to stabilize inflation. In past episodes, lengthy periods of tighter policy were needed to bring inflation under control. For example, during the 1980 – 82 disinflation in the United States, the federal funds rate exceeded headline consumer price inflation long after price pressures started to ease.

Currently it is not yet clear whether and for how long the real rate will need to be positive (that is, when the policy rate exceeds the rate of expected inflation).

War or not war it seems that the earnings should continue to recovery this year.

Inflation and Central Banks actions will impact inevitably the financial markets and let’s will see how strong/weak the markets are ready on it.

The PMI is above 50 and this is in line with the papers that we have summarized in this article.