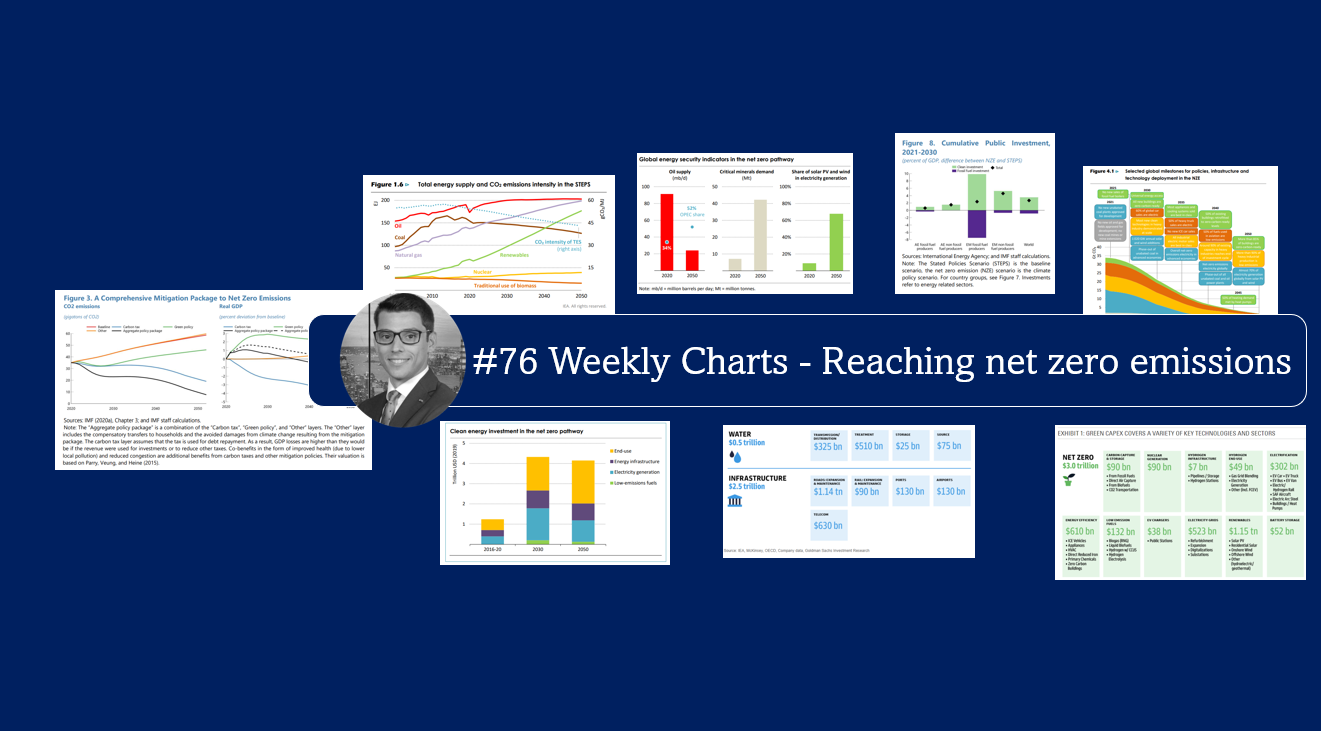 Governments have a crucial role to play to bring about a transition from a high- to a low-carbon path, including through investing in catalytic green infrastructure, providing R&D incentives and carbon price signals, and ensuring a just transition. A front-loaded green infrastructure push would also help economies recover from the COVID-19 crisis. This note outlines a pathway of achieving this policy mix in the G20 over the next several years.

A green infrastructure push would have the double benefit of supporting output and employment in the recovery from the Covid-19 crisis and putting in place the conditions to support the transition. At the same time, a green investment push alone is unlikely to reduce emissions to net zero. Carbon pricing is critical to mitigation because it incentivizes both energy efficiency gains and a reallocation of resources from high- to low-carbon activities. At the same time, even a combination of investment and carbon pricing would need to be complemented by an active support of the development and industrial-scale deployment of new low-carbon technologies to achieve a full transition to net zero emissions, since in some sectors, no viable low-carbon technology exists at the moment. Last but not least, a fair transition requires compensating affected households for the impacts of higher carbon prices and supporting the transitions of workers from high – to low carbon sectors; revenues from carbon pricing could be used to this end. The amount of capital committed net zero targets is accelerating rapidly and is indicative of where we’re going at a country, corporate and consumer level. How does this impact capital? Those capital allocators being asked to undertake massive infrastructure projects with long duration are going to need to be incentivized with attractive and more importantly, durable returns. Many corporates and sectors are still very early in starting their net zero journeys and if they are successful over time, which we expect many will be, the alpha opportunities for investors look sizable. Ultimately, we expect Green Capex to be the dominant driver of global infrastructure over the next decade and a stock-impacting investment theme for both sustainability fund managers and generalist investors. We believe the building blocks needed to execute on UN Sustainable Development Goals (SDGs) alone will require investment with long lead times (2-12 years) to avoid bottlenecks and delays. While there has been much focus on Green Capex for final products such as residential solar expansion, offshore wind farms, and electric vehicles — there has only recently begun to be a focus on the building blocks needed to ensure execution to achieve key SDGs. We view the products and companies operating in these areas as ‘Greenablers’ (Green Enablers). Examples include semiconductors (which improve efficiencies of end-products), copper (the commodity has a direct role in the production of batteries and renewables) electricity transmission lines (critical for successful renewables expansion). We also believe cybersecurity will play a more important role in automation and related energy efficiency gains. The need for Green Capex is immense – approximately $6 trillion annually this decade, up from $3.2 trillion per year in 2016-20 according to Goldman Sachs Research. As more countries pledge to achieve net zero, largely by 2040-2050, we expect governments will provide infrastructure, water and clean energy stimulus via tax breaks, grants and direct investments.

On the corporate side, Green Capex spending today does not appear to be sufficient, but we believe there is ample capacity for additional expenditure across most sectors, supported by free cash flow and balance sheets. Reinvestment of cash flow into capex and research & development has declined over the last decade and is expected to be circa 50% in 2022 versus the 60%-70% levels seen over much of the prior decade, while balance sheets have strengthened.

As a result, publicly traded companies are investing $1 trillion per year less than they have historically, which we regard as spare capacity that could be deployed into Green Capex. We also expect greater investor credit for companies with attractive corporate returns investing incremental Green Capex. More recently, we have seen a surge in green private equity capital raises, and future growth is likely to be strong.

The Potential for Long-Term Earnings Growth

The stock market has rewarded companies with Green Capex and can continue to do so, in our view. We have witnessed equity outperformance from Green Capex-exposed companies reinvesting a rising percent of cash flow in capex and research & development, and the ‘Greenablers’ where increased reinvestment will be needed more urgently due to project lead times. It is important to remember that companies investing in Green Capex reduce not only their emissions, but the emissions of their customers. As such, we expect firms making incremental Green Capex investments to see durable demand for their products and long-term earnings growth. Achieving net‐zero emissions by 2050 is a monumental task, especially against a backdrop of increasing economic and population growth. It calls for an unwavering focus from all governments, working together with industries and citizens, to ensure that the transition to global net‐zero emissions proceeds in a coordinated way without delay. We look at what the changes that deliver net‐zero emissions globally by 2050 in the NZE would mean for the economy, the energy industry, citizens and governments.

Reaching net zero emissions – the trend is drawn, but the execution in my view is very optimistic.

In this research I’ve found interesting the “Green Capex” as metric to focus over the periods and how this metric could become the dominant driver of future’s global infrastructures.