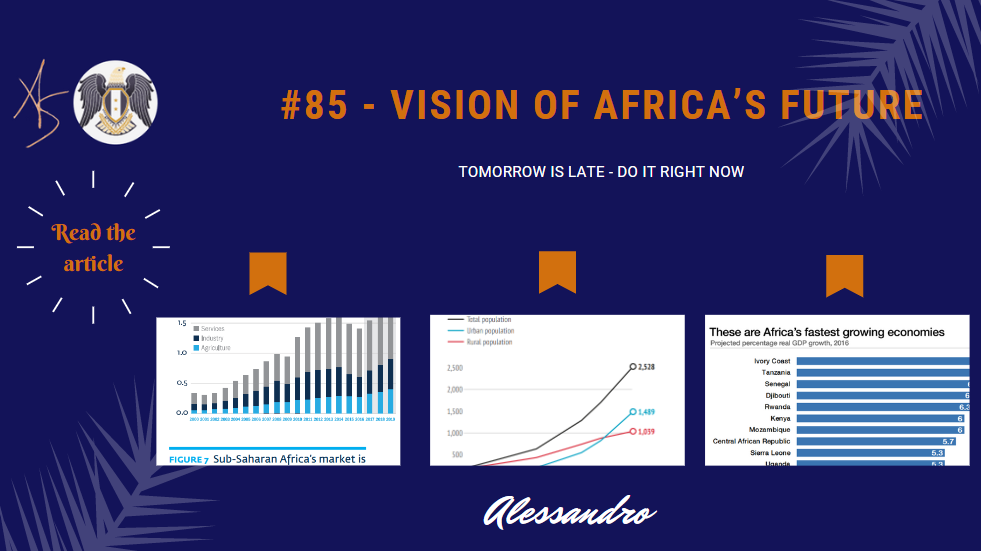 Africa needs to find ways to accelerate job creation for young people in the formal sector of the economy.

Without significantly higher rates of economic growth, Africa will be unable to reduce the size of the informal sector, and unemployment generally.

Africa is and will continue GOVERNANCE to be considerably affected by urbanisation. Although at present the continent is mostly rural, the African urban population is growing fast: there are expected to be 824 million urban dwellers in 2030, and 1.5 billion in 2050, against 548 million in 2018.

To enhance African digital trade and investment, policymakers need to address three main objectives: (i) connectivity for all; (ii) digital skills for all; (iii) digital safety and resilience for all. The implementation of these so-called “three digital imperatives for African transformation” requires new forms of trusted collaboration between the private sector, civil society organisations and the public sector. Africa has a large and growing working-age population. Its increasing labour force will, by 2037, be larger, as a percentage of its population, than that of the EU-27 and by mid-century, larger than that of North America. This growing working-age population has the potential to drive and accelerate economic growth, provided the continent can improve on the associated skills base. The reverse applies in Europe where the contribution from labour to growth is declining, meaning that contributions from capital and technology in Europe first have to account for the drop in the contribution from labour if growth rates are to be maintained. Capital flows into the Africa region, in the form of bank lending and equity and bond offerings, have strengthened considerably, reflecting improved global sentiment toward emerging markets in general and in Africa in particular. Remittances, an important source of capital and foreign exchange for all developing countries and no less so for Africa, are also improving. Progress is uneven across the continent, as resource intensive economies – especially oil exporters such as Angola and Nigeria – continue to lag, while agricultural exporters enjoy stable growth. And several large economies – Ethiopia, Côte d’Ivoire, Senegal, Tanzania, and Ghana in particular – have posted growth rates of over 6 percent over the last few years. Overall, the economic outlook for the region is positive.

By 2030, Africa’s middle and high-income groups are expected to grow by 100 million, boosting them to over 160 million people across the region. These rapidly expanding groups of consumers will spend smaller portions of their income on basic necessities such as food and beverages and more on transportation, information and communication technologies, housing, education, clothing and footwear, pharmaceuticals, and other products and services.

All in all, private enterprises and investors that are prepared to take advantage of these trends and serve Africa’s burgeoning consumer classes stand poised to tap new markets and reap significant gains. Growing populations with rising incomes across Africa are spurring demand for reliable electricity, affordable housing, good jobs, healthier environments in which to live and work, consumer goods, and higher quality, more resilient food resources. IFC, often working with the World Bank and MIGA, has intervened in multiple nations and regions to support private sector provision of such goods and services.

Capital markets in Africa are slowly developing, with significant room for further growth. Since the 1990s the number of active SSA stock exchanges has increased from five (South Africa, Zimbabwe, Kenya, Nigeria, and Uganda) to 18 today. However, only a few of these stock markets are active and well developed. Nevertheless, the depth of capital markets—measured by the median stock market capitalization as a share of GDP—has risen significantly and is now around 50 percent. The Johannesburg Stock Exchange dominates the region, with a capitalization of more than three times national GDP in 2016. The stock market capitalization in Nigeria—the second largest market in SSA—did not exceed 16 percent of Nigeria’s GDP in recent years. Moreover, except for Nigeria and South Africa, all sub-Saharan stock exchanges are characterized by a relatively low number of listed companies. Why technology is an opportunity to reignite growth and job creation

The advance of technology – including machine learning, artificial intelligence and advanced robotics – is rapid and unstoppable. Although their impact will be disruptive, these technologies represent an enormous opportunity to reignite productivity, income and economic growth in South Africa.

As our analysis shows, they have the potential to create millions of high-quality jobs, improve operational efficiency in both business and government, and help deliver better outcomes for customers and citizens.

By comparison, several other emerging economies have achieved strong growth over this period. A recent study by the McKinsey Global Institute analysed the performance of 71 developing economies over the last 50 years, and identified 18 outperformers that had sustained rapid GDP growth over decades. Those countries provide valuable lessons for South Africa. They have driven a pro-growth agenda of productivity, income, and demand. As a core element of that agenda, they have fostered productive companies and highly competitive industries. By leveraging technology to improve productivity and innovation, South Africa has the opportunity to emulate these economies.

Our research, including analysis by the McKinsey Global Institute and a survey of about 70 South African leaders, finds that technology could reverse these trends by unlocking greater productivity across many sectors of the economy. In metal beneficiation and fabrication, for example, robot-assisted production can reduce human error and greatly increase efficiency. In mining, underground mine automation can improve safety and reduce costs. In financial services, digitisation can improve customer experience and drive greater efficiency. Such productivity gains from digitisation and machine learning have the potential to drive substantial improvements of individual businesses – and the entire South African economy. We estimate that these technology-related gains could triple South Africa’s productivity growth, more than double growth in per capita income, and add more than a percentage point to South Africa’s real GDP growth rate over the next decade.

It seems that Africa is ready for starting a real path to growth over the years. Honestly I didn’t read too much on Africa, but what I think is that they need more investments than I read and decisively more education.

Surely I’ll read much more than what you can find in this article, but surely as emergent economy, Africa could have really big potential in the future in my view.