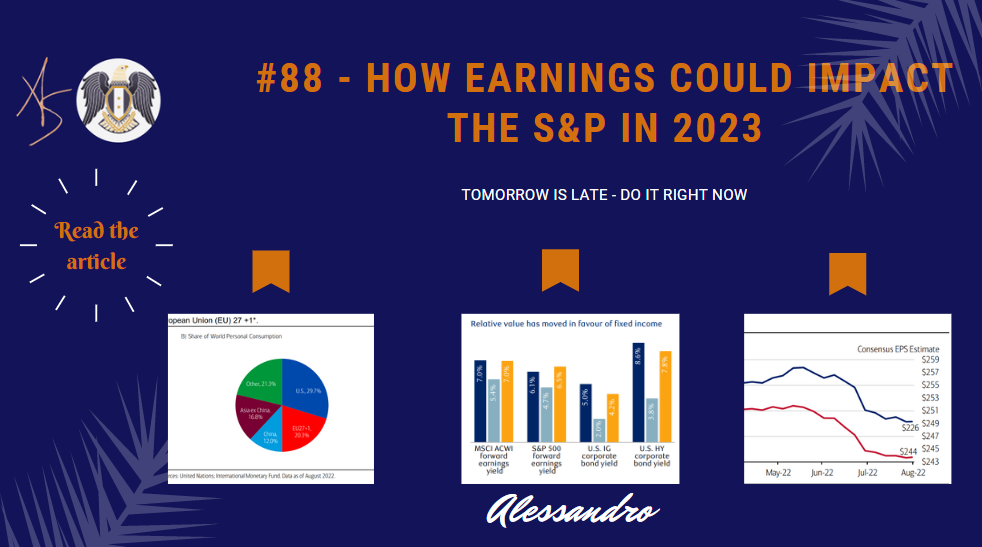 Earnings – In this article let’s see:

Here you can find other articles of your interest: It’s hard to recall a time when equity-market strategists were as divided as they are now over whether the stock market rally since mid-June is a bear-market rally or the beginning of a new bull market. While there are technical and fundamental analysts on both sides of this debate, the evidence to justify their views is more clearly divided, with technical signals more likely to favor the bull camp and fundamental trends supporting the bear camp.

That said, this summer’s rally retracing 50% of the 2022 bear market is an exception, in our view. Technical rules based on historical experience have caused many strategists to declare the bear market over and the beginning of a new bull market.

Indeed, 50% retracements of S&P 500 bear markets have been associated with new cyclical bull markets, as the S&P 500 Index retested its prior lows in a couple of instances but never made a lower low after a 50% retracement.

This view has been strengthened by various momentum and breadth indicators which have also worked well throughout the past 75 years, with one caveat. This reliable track record does not apply as well to some other indexes, such as the NASDAQ.

Those Equity valuations are unlikely to return until zero rates and quantitative easing (QE) return. The 25% hit to P/Es coincided with the S&P 500 going from about 4,800 to about 3,600 with earnings relatively unchanged.

Applied Global Macro Research (AGMR) has estimated 2023 earnings under three different scenarios: (1) a growth pause, resulting in earnings per share (EPS) of $180; (2) a mild recession, resulting in EPS of about $165, and (3) a deep recession, which would see EPS of $155.

Currently, earnings are running at about $220. Exhibit 1 shows S&P 500 levels for P/E troughs in recessions since 1970 and these three earnings scenarios.

Volatility has returned to financial markets amid renewed uncertainty regarding the path of monetary policy, inflation, and the economy. We evaluate the macro headwinds and tailwinds and discuss implications for portfolio positioning. Inflation remains arguably the most important factor shaping the macro backdrop, because how it evolves will directly influence the pace of monetary policy tightening and, in turn, the economy and markets.

While inflation in Europe is likely to remain more problematic due to an ongoing energy crisis with no resolution in sight, recent inflation data for the U.S. and other major economies that suggest price pressures may be cresting represent an auspicious development.

Although we believe price pressures should start to moderate, the speed at which inflation will ease remains highly uncertain; some dynamics suggest it could take considerable time for inflation to reach levels that are palatable for central banks. Setting the tone for the rest of the world, the U.S. economy has sharply decelerated this year, prompting worries of an imminent recession.

But with households still buttressed by a sizable cushion of savings and the labour market showing strength with ample job openings, the immediate risks appear to be mostly contained and a “soft landing” scenario remains possible, in our view.

Nevertheless, we believe the probability of a U.S. recession will likely continue to build, in part because the Fed’s intention to guide interest rates to a restrictive level would further squeeze financial conditions and curb economic activity. The recent deterioration in our U.S. Recession Scorecard, which has seen three out of seven indicators shift to recessionary status since June, corroborates the view that the likelihood of a U.S. economic downturn over the next 12 months is rising. Business-to-business, or B2B, spending, dipped in July. On a seasonally adjusted basis, B2B spending fell 2.5% from June. Compared with a year earlier, spending was up 12.4%, which marks four consecutive months of decelerating growth and is the lowest annual rate since early 2021, when comparisons were to the period before the COVID-19 pandemic began. Businesses have contended with rapid cost increases for more than a year, and there are early indications that the worst of the current bout of inflation in the U.S. was contained to the first half of the year. Notably, B2B spending on food, fuel, oil and gas has declined for consecutive months after rising sharply in the spring. Further, U.S. businesses appear to have had surprising success passing through cost increases to consumers. According to the Bureau of Economic Analysis, after-tax corporate profits, measured as a share of nominal GDP, were their highest on record in the second quarter. At 12.1%, they were a full percentage point higher than in the first quarter. Earnings – My conclusions and considerations

We’re going to the end of this year and I like to wonder what could happen to the markets the next year (2023), how the inflation could change, how the Fed’s policy could impact the economy and the whole world.

In this article we summaries what are the earnings forecast by the reports and how the S&P could suffer about it.

Below you find some useful outcomes: