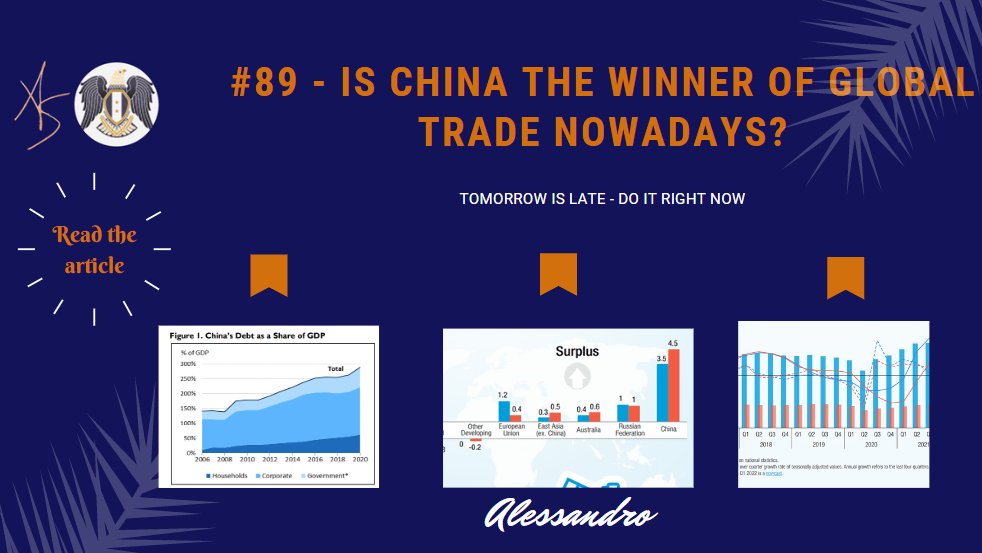 China – In this article let’s see:

Here you can find other articles of your interest: Global trade reached a record high in 2021, about US$ 28.5 trillion; an increase of almost 13 per cent relative to pre-pandemic levels.

Trade in goods and trade in services followed similar patterns during 2021, with stronger increases during the first half of the year. Trade growth continued to be positive for both goods and services in Q3 2021 and especially in Q4 2021. Trade trends in the major economies The import and export trends of some of the world’s major trading economies further illustrate the patterns of trade growth during recent quarters. In Q4 2021, trade in goods in all major economies was well above pre-pandemic levels in 2019, for both imports and exports. Negative quarter-over-quarter rates reveal that the positive exports trends reversed for some of the major economies during Q4 2021. Nevertheless, export growth in this period remained strong for China, the United States and also for the Republic of Korea. Conversely, import trends continued to be positive. Data on services is reported with a lag of one quarter. China’s total debt—household, corporate, and government—reached 290% of GDP in 2020, with the majority of debt held by companies.

China’s property market accounts for almost 30% of GDP, a higher percentage than in most countries, while private consumption accounts for an estimated 37% of GDP, a low share for an economy of China’s size and top global trade position.

Property is a main source of local government revenue and a key factor in corporate valuations and household net worth, which complicates efforts to reduce debt and address inequality, despite China’s leader Xi Jinping’s stated goals. The PRC government appears reluctant to further ease fiscal and monetary policies as it seeks to deleverage the property sector and contain market risks.

The government is instead using targeted fiscal measures to boost growth, such as value added tax (VAT) rebates for certain exports and tax incentives for research and technology. China appears to be looking again to trade expansion to drive growth. Its global exports in 2021 rose by 30% over 2020. China is also seeking to boost production quality.

In May 2021, China eliminated VAT rebates for certain types of steel and lowered import tariffs and raised export tariffs for steel inputs likely to boost prices and promote quality. (The October 2021 EU-U.S. agreement on steel and aluminum sets new import restrictions based on quality.) China supplies over 50% of global steel; its crude steel production fell by 3% in 2021.

The relationship between China and the world is changing. On the new McKinsey Global Institute China World Exposure Index, China’s exposure to the world in trade, technology, and capital has fallen in relative terms. Conversely, the world’s exposure to China has increased.

This reflects the rebalancing of the Chinese economy toward domestic consumption. In 11 of the 16 quarters since 2015, consumption contributed more than 60 percent of total GDP growth. Exposure to China varies significantly among sectors and geographies, according to our analysis of 20 sectors and 73 economies.

Our simulation shows that $22 trillion to $37 trillion of economic value (equivalent to about 15 to 26 percent of global GDP by 2040) could be at stake from less or more engagement between China and the world in five areas: (1) growth as an import destination; (2) liberalization of services; (3) globalization of financial markets; (4) collaboration on global public goods; and (5) flows of technology and innovation.

China has made huge strides in innovation in recent years, becoming a global force in the world’s digital economy and artificial intelligence (AI) technologies. In many types of technology, it is already the largest consumer.

Access to the Chinese market has provided many high-tech players with significant growth opportunities. According to an MSCI index, the US information technology sector makes 14 percent of its revenue in China.

The Chinese economy can benefit in the future from powerful domestic growth drivers, including urbanization, and it has significant scope to boost per capita GDP and productivity. Comparison with Japan as it stood in the 1990s—when it was the world’s second-largest economy, behind the United States—is instructive. Japan’s urbanization rate was already 78 percent; China’s today is 58 percent, 20 to 30 percentage points below that of high-income economies. Since the mid-1990s, Japan has struggled to achieve significant growth momentum. China is different. It has a large population, and incomes are relatively low in comparison with those in Japan and other advanced economies.

Urbanization and continuing reform of the economy can boost productivity and enable further growth in incomes and GDP.

China – My conclusions and considerations

I’m very interested to the global trade in general, but in this article, I wanted to know how exactly China is playing the game, and what we’ve seen is very astonishing.

China is going fast under this aspect and over the years this country will change rapidly.

What I think in my view is that to understand how the world could change despite these changes, and how the companies and the governments could act or react about it.